How did Bheema meet Hanuman :

Once Draupadi asked Bheema to bring her Saugandhika flower. Bheema went towards the northeastern direction of the wind to smell the essence of Saugandhika flower. He climbed the Sandalwood mountain from the Himalayas to see the peaceful ashramas there. The elephants were terrified when Bheema went across them. The forest was shaken and when he saw a lake, there was a Large monkey sitting beside the garden of banana, whose tail was crossed on the way. Bheema, who entered the garden, shouted the monkey to move across. So the monkey told “You came here and disturbed me from my sleep and no one can go ahead in this path. Go back. ” 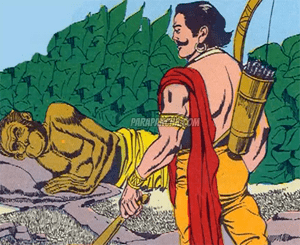 Them Bheema says that he is the son of the king Pandu kings. If you do not let me go, I can jump from above. That Monkey says that I’m very old and I can not even raise my tail. You can push my tail aside and move on. Bheema with much difficulties tries to push the tail but could not succeed. 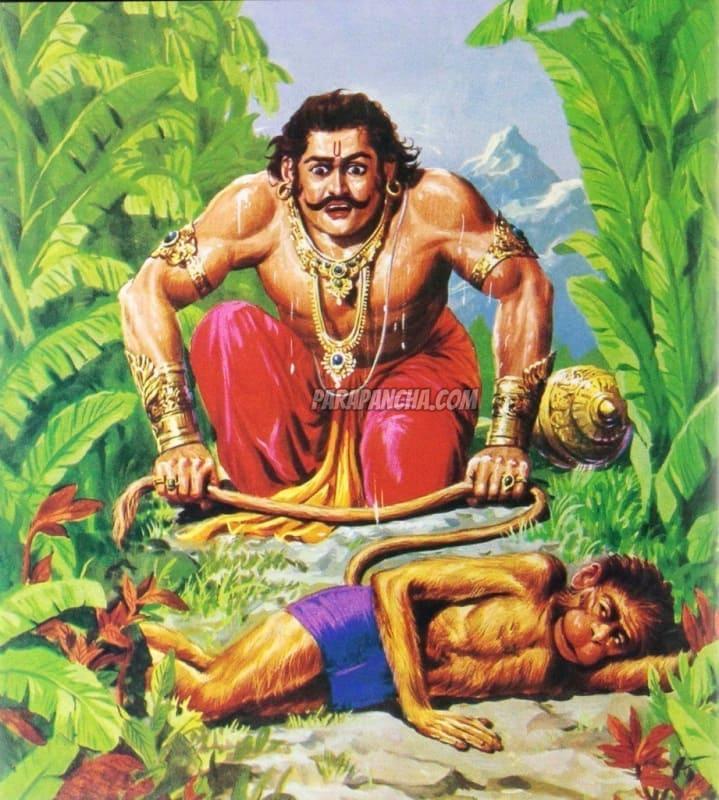 Then the monkey itself will push its tail aside from his left hand. Then Bheema bows to the monkey and asks for forgiveness for showing the Arrogance towards the monkey. “Are you my brother Hanuman? Yaksha? Goddess? Gandharva? Who? Who are you? Why are you in this form” asked Bheema.

Then Monkey changed its form to Lord Hanuman and hugged Bheema. Later, Bheema relaxed for a while and asked Hanuman about the Saugandhika flower. Hanuman told that flower is in the garden of Kubera. He sent Bheema there and wished him good luck.

Bheema came across a beautiful lake told by Hanuman and he was happy by seeing the Lotus, swan, wheelbarrow there. There were also Saugandhika flowers guarded by two soldiers. When they tried to stop Bheema, he broke them down. Their weapons did not affect him. Soldiers ran and told Kubera. When Kubera came to know about Bheema, he allowed him to take the flower. Bheema took the and gave it to Draupadi. 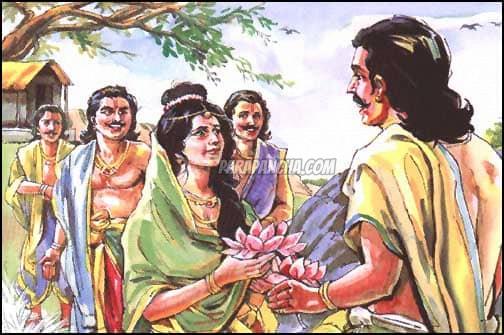